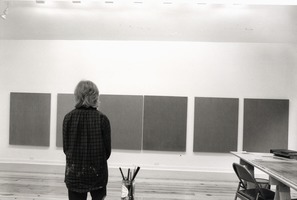 Raquel Rabinovich is a New York based, Argentinian-American artist known for monochromatic paintings and drawings, large-scale glass sculpture environments, and site-specific stone sculpture installations along the shores of the Hudson River.

Throughout her artistic career, Rabinovich has worked with a wide range of media including drawing, collage, painting, sculpture and installation. Informed by her underlying fascination with the ineffable nature of existence, Rabinovich’s work embodies concealed aspects of existence that lie behind the appearance of things, thoughts, language, and the world. Exploring what she calls the “dark source,” the artist attempts to reveal that which is concealed emerging into view, making the invisible visible. This seemingly insoluble conundrum has been central to Rabinovich’s art practice, shaping the essence of her oeuvre for the last sixty years.

Born in Buenos Aires in 1929 into a Russian and Romanian Jewish immigrant family, Rabinovich has lived and worked in the United States since 1967 and currently resides in Rhinebeck, New York. Raised in Córdoba, Argentina, Rabinovich was a political prisoner under Juan Domingo Perón’s regime, later moving to Europe where she would live throughout the mid-late 1950s.

Rabinovich’s travels to India, Nepal, Indonesia, Egypt, Peru and even the Hudson Valley have had a profound impact on her work. She is repeatedly drawn to spaces of silence and darkness, deeply connecting with the authentic and rooted ancient traditions. This idea of silence and darkness, both literally and metaphorically, has led her to explore the ground’s relationship with the spiritual, using mud, stone and glass as metaphors for the passage of time and the ephemeral nature of existence.

Her work is also informed by her love of poetry. She connects her practice to the non-literal and magical worlds in Latin American literature, and the liminal space between the lines found in texts by Latin American writers such as Jorge Luis Borges, Pablo Neruda, Gabriel García Márquez and Luisa Valenzuela, seen in her ongoing series of works on paper titled “When Silence Becomes Poetry.”

At the beginning of the 2000’s she had set aside paint in favor of mud drawings and stone sculpture installations.  When she began painting again in 2014, drawing and painting remained central to her art.

Rabinovich has also been the recipient of numerous grants and fellowships, including the 2011-2012 Lee Krasner Award for Lifetime Achievement from The Pollock-Krasner Foundation, and is included in the Oral History Program of the Smithsonian Institution Archives of American Art.

Over the course of a seventy-year-long career, New York-based Argentinian-American artist Raquel Rabinovich has been concerned with the paradox of making the invisible visible. She integrates themes of mythology, existence, nature, and transcendence in her monochromatic paintings and drawings, as well as in her sculptural practice that encompasses large-scale glass environments and site-specific stone installations along the shores of the Hudson River. Through her exploration of a range of material choices and artistic processes, Rabinovich’s work conveys “that which is concealed emerging into view.”[1]

Born in 1929 in Buenos Aires, Argentina, to a Russian and Romanian Jewish immigrant family, Rabinovich was raised in nearby Córdoba. There she began taking painting and drawing classes with Italian artist Ernesto Farina. At this time she was also politically active and was briefly held as a political prisoner. She later studied medicine and studio art at the Universidad de Córdoba before moving to Buenos Aires, where she studied with painter Héctor Basaldúa. In the mid-1950s, she moved to Europe, where she lived in Paris, Edinburgh, and Copenhagen, and married her husband, José Luis Reissig, in 1956. In Paris, she attended classes at La Sorbonne and at the atelier of French Cubist painter André Lhote. Her studies and travels introduced her to the work of Modern European artists such as Georges Braque and Piet Mondrian, the Art Informel movement, and Old Masters—in particular Diego Velázquez—all of which drove her work into a more non-objective mode of painting, evolving from semi-figurative portraits and still lives to pure abstraction.

Upon her return to Buenos Aires in the early 1960s, Rabinovich began a series of near-monochromatic paintings titled The Dark is Light Enough. These textural works, realized in a spectrum of earthy hues, marked the beginning of a lifelong investigation into what Rabinovich calls the “dark source.” For Rabinovich, the dark represents neither negativity nor absence but a rich realm of knowledge and wisdom. Each subsequent body of work, whether painting, drawing, collage, or sculpture, represents an embodiment of those “concealed aspects of existence which lie behind the appearance of things, thoughts, language, and the world.”[2] In her monochromatic paintings and drawings, layers accumulate and meld into variated fields of grey, black, and white, creating a muted shimmering effect that has been compared to the black cruciform paintings of Ad Reinhardt.[3]

As the political climate in Argentina became increasingly unstable, Rabinovich moved with Reissig and their three children to New York in 1967. They settled in Huntington, Long Island, where Rabinovich became immersed in the contemporary art scene. She joined the American Abstract Artists (AAA) and was introduced to the work of Jasper Johns, Barnett Newman, and Ad Reinhardt. She was particularly inspired by the subtle gridded canvases of Agnes Martin, whose practice of simply “sitting and looking” as an essential part of her artistic process resonated deeply with Rabinovich.[4] From the late-1960s to the mid-1970s, her earlier lyrical gestures gave way to more refined, near-geometric abstractions—most notably in her series of paintings titled Dimension Five.

Following her divorce from Reissig in 1979, Rabinovich moved to Manhattan, where her loft became a meeting place for fellow artists. There she continued to pursue a series of sculptures made from plates of tinted grey and bronze glass, a project she had begun in the early 1970s with the help of the nonprofit organization Experiments in Art and Technology (E.A.T.). Rabinovich worked with fabricators of tempered glass and produced a series of sculptures that range from tabletop maquettes to large-scale environments. Rabinovich sees these sculptures as a spatial extension of her paintings, allowing her to work with transparency in three dimensions and to create spaces that are “simultaneously accessible and inaccessible, open and enclosed, tangible and intangible, private and public, visible and invisible”—a set of paradoxical conditions that are present throughout her various bodies of work.[5] The layering of the tinted panels of glass created a play of “reality and illusion” and invited the viewers to see “from nothing to everything and from everything to nothing.”[6] By revealing the mechanics of human vision and perception, these glass environments evoke the work of Light and Space artists like Larry Bell, Robert Irwin, and James Turrell who, like Rabinovich, work primarily with “the medium of [one’s] own awareness.”[7] For Rabinovich, glass presented a medium that allowed her to play with states of translucency and opacity, as its “physicality would dematerialize to become just transparency.” Although these works evoke the visual language of Minimalism, for Rabinovich they were metaphors, referencing metaphysical, symbolic, architectural, and mathematical worlds.

This impulse to ground the viewer in perceptual observation can be traced to her own spiritual practice of Vipassana, a form of Buddhist meditation. With its connotations of perception, contemplation, and insight, Vipassana is an apt extension of her artistic pursuit to create a “visual silence” in her work.[8] In the late 1980s, around the time that she began practicing Vipassana, Rabinovich reunited with Reissig and traveled throughout South and Southeast Asia; her experiences of the regions’ various cultures and sacred architecture would go on to have a significant impact on her work, including series such as Chhodrtens (1989–1990), Garbhagrihas (1991-1993), and Thrones for the Gods (Suites A and B, 1992–1995). Given her longstanding interest in “spaces of silence and darkness”—including the ruins at Machu Picchu, the caves at Lascaux, and even the Catholic churches of Córdoba that she sought out for their quietude in her youth—it is not surprising that the temples and monuments she encountered in places like Nepal and India would inspire her to work increasingly in site-specific, architectural modes.[9]

By the early 1990s, Rabinovich had moved from Manhattan to upstate New York, where she created her first stone installations on her property in Rhinebeck. Titled Pabhavikas (1995–2000), a Pali word meaning “emerging from,” these stone mounds reference both ancient temples that seemed to Rabinovich to be born from the earth itself, as well as the metaphorical process of something concealed coming to the surface, revealing itself. To create these works, Rabinovich purchased truckloads of stones from local quarries and positioned them around existing rocks in the forest, gradually building up piles of stone that resemble the remnants of aging ruins. In 2001, she transferred this practice from the woods to the shores of the Hudson River. Titled Emergences (2001–2012), these site-specific stone installations are daily concealed and revealed by the cyclical rising and falling of the river tides, enhancing their themes of impermanence and flux. While many Emergences still exist, others have succumbed to the fluctuations of currents and time, an effect Rabinovich embraces; in this way, her stone installations differentiate themselves from the monumental gestures of some iconic Land artists, deriving instead from a quieter impulse akin to the ephemeral practices of Andy Goldsworthy or Richard Long.

Rabinovich’s deep-rooted love of poetry and literature has always been central to her practice. She is especially drawn to the magical worlds in Latin American literature present in the work of writers such as Jorge Luis Borges, Gabriel García Márquez, and Luisa Valenzuela. Rabinovich notes that “beyond the language of the novel or the poem or the story, there is always an element that is beyond the words, in between the lines, which is not literal….I resonate with that world.”[10] Many of Rabinovich’s series of paintings and works on paper can be seen as odes to the intangible, liminal space between language and silence. In Gateless Gates (1995-1997), Light Unworn (1998-2000), and Thresholds (2014–2017), for instance, the artist conceals words and statements within the painting; in order to discern these embedded passages, viewers must slowly linger with the work over a period of time, visually excavating them from beneath layers of oil paint and wax.

Rabinovich’s interests in rivers and language merges in the series River Library (2002–present). To create these works, she submerges handmade paper into mud from rivers as near as the Hudson and as far-flung as the Ganges and the Paraná. When dry, she sometimes arranges them into diptychs resembling open codices, or rolls them into the scroll-like forms. She has made hundreds of these “drawings” to date, each with a color and quality unique to its source. For Rabinovich, rivers, like stones, are “repositories of history,” containing information about a region’s geology as well as the past and present civilizations that have congregated along their shores.[11] As such, the River Library works function like visual documents that record both natural and cultural history, where mud becomes “the alphabet of a language yet to be deciphered.”[12]

Most recently, Rabinovich has completed a series of works on paper titled Magic Squares (2018–2020). Each work features the subtle outlines of the magic square’s gridded form, a mathematical problem in which a set of numbers placed in each of the grid’s rows and columns adds up to the same sum. According to Rabniovich, “magic squares are ancient symbols of mythical significance and esoteric spirituality. They imply the combination of numbers that were believed to be the source of the essentials of wisdom. In this series of drawings I don’t inscribe the numbers, which are present in their absence.”[13]